AZOTH is a word formed from the initial and final letters of the Greek, Latin and Hebrew Alphabets thus: — A and Z, Aleph and Tau, Alpha and Omega. It is used with various meanings by different writers but generally signifies Essence.

These are the Veils of the Negative Existence depending from Kether. 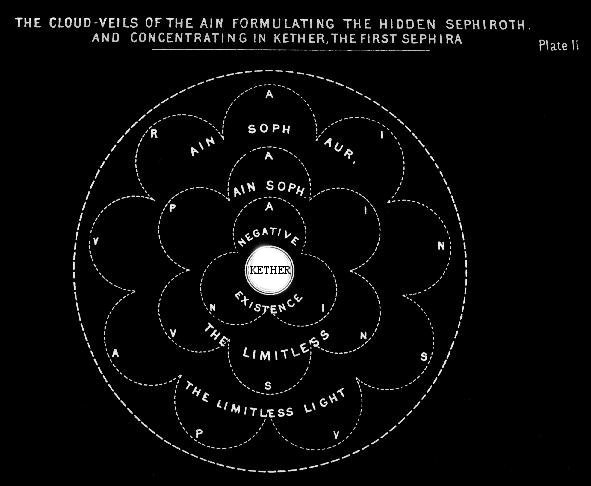 — MACROPROSOPUS or The Vast Countenance is a title of Kether, and another of its titles is the Ancient of Days, AATIK YOMIN

Kether or the Vast Countenance emanates first as ABBA, the Supernal Father, and AIMA the Supernal
Mother.

The Supernal Father is referred to YOD of Tetragrammaton, and

The Supernal Mother is referred to HEH.
ELOHIM

is a name given to these two Persons united.

As Elohim they become the parents of THE SON ZAUIR ANPIN

The Queen, and KALAH

The Letters of the Name YHVH contain these meanings, thus:—

YOD is referred to ABBA.

These Letters are also referred to the Four Worlds and the Four Suits of the Tarot thus:—

ın each of the four worlds are the Ten Sephiroth of that World, and each Sephirah has its own ten Sephiroth, making 400 Sephiroth in all — the number of the letter TAU, The Cross, The Universe, the Completion of all things.

The Tarot is thus referred to The Tree of Life:

the four aces are placed on the Throne of Kether — the remaining small cards of the suit desired on the respective Sephiroth, 2 on Chokmah, 3 on Binah, etc. The 22 Trumps are then arranged on the Paths between them, according to the Letters to which they correspond.

the kıng and queen of the suit are placed beside Chokmah and Binah respectively; the Knight and Knave by Tiphareth and Malkuth.

the tarot trumps thus receive the equilibrium of the Sephiroth they connect.

the admıssıon badges used in the grade of Philosophus are as follows:

the calvary cross of twelve squares, admitting to the Path of Qoph, the 29th Path, refers to the Zodiac and to the Eternal River of Eden divided into Four Heads:

ANOTHER ARRANGEMENT OF THE TREE

There are various formats of the Sephiroth. The most frequent has already been given, but there is another in common usage and will be seen to have been employed in some of the large Altar diagrams of both the Practicus and Philosophus Grade. It is often referred to as The Seven Palaces of Assiah attributed to the ten Sephiroth.

This drawing represents the triad of elements operating through the Sephiroth and reflected downwards into the Tree. Air is reflected straight down the Middle Pillar, from Kether through Tiphareth to Yesod and the upper quadrant of Malkuth. Water is relfected cross-wise from Binah through Chesed to Hod. Fire is reflected cross-wise from Chokmah through Geburah to Netzach. Malkuth therefore becomes the receptacle of the other three elements.

THE REFLECTION OF THE ELEMENTS DOWN THE TREE

Let the PHILOSOPHUS meditate upon the symbol of the Fire Triangle in all its aspects. Let him contemplate the symbol of the Planet VENUS until he realises the Universal Love which would express itself in perfect service to all mankind and which embraces Nature both visible and invisible.

Let him identify himself with the powers of FIRE, consecrating himself wholly until the Burnt Sacrifice is consummated and the Christ is conceived by the Spirit.

Let him meditate upon the Triplicity of Fire - its attributes and correspondences.

Let the Aspirant meditate upon the Cross in its various forms and aspects as shown in the Admission Badges throughout the Grades.

‘Except an ear of wheat fall into the ground and die, it abideth alone, but if it die, it bringeth forth much fruit.’

Let him endeavour to realise his own place and relative importance in the Universe, striving to stand outside himself and allowing only such claims as he would allow to another.

Let him carefully abstain from talking of himself, his feelings or experiences that he may gain continence of speech, and learn to control the wasteful activities of his mind.

Let him contemplate the Sun as thinly veiled in clouds.