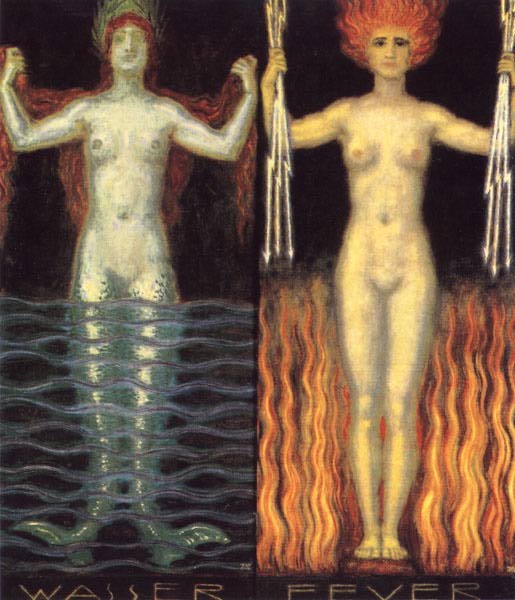 The Names and Alchemical Symbols of the Three Principles of Nature are:

The metals attributed to the Planets in Alchemy are:

The following terms are used in books about Alchemy. They have the meanings given below.

The Stem and Root of the Radical Essence of Metals

Tiphareth-- analagous to Gold and the Sun

Malkah--analagous to Silver and the Moon

The Four Orders of the Elements are:

These are the Essential Spiritual Beings called upon to praise God in the 'Benedicite Omnia Opera'.

The Kerubim are the Living Powers of Tetragrammaton on the Material Plane and the Presidents of the Four Elements. They operate through the Fixed or Kerubic Signs of the Zodiac and are thus symbolized and attributed:

Tetragrammaton means 'Four-Lettered Name' and refers to the Unpronounceable Name of God symbolized by 'Jehovah'.

The Laver of Water of Purification refers to the waters of Binah, the Female Power reflected in the Waters of Creation.

The Altar of Burnt Offering for the sacrifice of animals symbolizes the Qlippoth, or Evil Demons of the plane coniguous to and below the Material Universe. It points out that our passions should be sacrificed.

The Qlippoth are the Evil Demons of Matter and the Shells of the Dead.

The Altar of Incense in the Tabernacle was overlaid with gold. Ours is Black to symbolize our work which is to seperate the philosophic Gold from the Black Dragon of Matter.

This altar diagram shows the Ten Sephiroth with all the connecting Paths numbered and lettered, and the Serpent winding over each Path. Around each Sephira are written the names of the Deity, Archangel and Angelic Host attributed to it. The Twenty-Two Paths are bound together by the Serpent of Wisdom. It unites the Paths but does not touch any of the Sephiroth, which are linked by the Flaming Sword.

The Flaming Sword is formed by the Natural Order of the Tree of Life. It resembles a Flash of Lightning.

Together the Sephiroth and the Twenty-Two Paths form the 32 Paths of the Sefer Yetzirah, or Book of Formation.

The Two Pillars on either side of the Altar represent:

Active: The White Pillar on the South Side. Male. Adam. Pillar of Light and Fire. Right Kerub. Metatron.

Passive: The Black Pillar on the North Side. Female. Eve. Pillar of Cloud. Left Kerub. Sandalphon.

LET THE ZELATOR meditate on a straight line. Let him take a ruler or pencil and by moving it a distance equal to its length, outline a square.

Having done this, let him, after quieting his mind with the rhythmic breathing taught in the first meditation, mentally formulate a cube, and endeavour to discover the significance of this figure and its correspondences.

Let him meditate upon minerals and crystals, choosing especially a crystal of SALT, and entering into it, actually feel himself of crystalline formation.

Looking out on the Universe from this standpoint, let him identify himself with the EARTH SPIRITS in love and sympathy, recalling as far as he can their prayer as said in the closing of the Zelator Grade.

For the above ideas consult a simple astrology manual. Make notes of the ideas and pictures which arise in your mind.

The Four Worlds of the Qabalah are:

The Ten Houses, or Heavens, of Assiah, the Material World, are:

THE DIVINE NAMES ATTRIBUTED TO THE SEPHIROTH

(The definitions of the Hebrew Names can only be approximate and were not given in the actual GD texts. For the most part the tables of Bill Heidrick was consulted among others)

2. Chokmah  Auphanim     The Wheels / Spinning Ones

4. Chesed Chashmalim  The Shining Ones

5. Geburah  Seraphim The Burning Ones / Exalted Ones

10. Malkuth Sandalphon Soul of the Redeemer

3. Binah Yhvh Elohim  S/he is Male and Female Deities

5. Geburah  Elohim Gibor  The Male and Female Deities are Mighty

8. Hod  Elohim Tzabaoth The Male and Female Deities are Splendor

The traditional Tarot consists of a pack of 78 cards made up of Four Suits of 14 cards each, together with 22 Trumps, or Major Arcana, which tell the story of the Soul.

Each suit consists of ten numbered cards, as in the modern playing cards, but there are four instead of three honours: King or Knight, Queen, Prince or Emperor, Princess or Knave.

the Four Suits are: