This article on the incredibly ancient sunken city recently found off the gulf of Cambay in India was published through courtesy of the author Linda Moulton Howe of www.earthfiles.com , an excellent site where this article and many others on relative topics can be found.

The underwater archaeological site that could be more than 9,000 years old is about 30 miles west of Surat in the Gulf of Khambhat (Cambay) in northwestern India.You can hear Real Audio of this report
provided by 1090WJKM RadioCedar Vine Manor, Lebanon, Tennessee

February 16, 2002  Surat, India - A month ago in mid-January, marine scientists in India announced they had sonar images of square and rectangular shapes about 130 feet down off the northwestern coast of India in the Gulf of Khambhat (Cambay). Not only are their sonar shapes with 90-degree angles, the Indian Minister of Science and Technology ordered that the site be dredged. What was found has surprised archaeologists around the world and was the subject of a private meeting two weeks ago attended by the Indian Minister in charge of investigating the underwater site about thirty miles off the coast from Surat.

An American who traveled to that private meeting was Michael Cremo, researcher in the history of archaeology for the Bhakti Vedanta Institute in India and author of the book Forbidden Archaeology. I talked with him today in India about the dredging operation, what the ocean engineers found and the implications of first carbon dating of artifacts at more than 9,000 years.

Michael Cremo, Researcher of Ancient Archaeology and Author, Forbidden Archaeology: "Within the past few months, the engineers began some dredging operations there and they pulled up human fossil bones, fossil wood, stone tools, pieces of pottery and many other things that indicated that it indeed was a human habitation site that they had. And they were able to do more intensive sonar work there and were able to identify more structures. They appeared to have been laid out on the bank of a river that had been flowing from the Indian subcontinent out into that area.

According to the news releases, they have done a radiocarbon testing on a piece of wood from the underwater site that is now yielding an age of 9,500 years which would place it near the end of the last Ice Age.

Yes, those are the indications that are coming. There were actually two radiocarbon dates: one about 7500 years old and another about 9500 years old. The 9500 year old one seems to be the strongest one. That's the one they are going with. This was announced by Minister Joshi (Murli Manohar Joshi is Indian Minister for Ocean Technology) at this meeting I attended in Hyderabad, India. He said there is going to be more work going on. It's difficult because it's very difficult to see down there. There is a very swift current. So, it's going to have to be a pretty massive effort, but he said the government of India is willing to put the resources behind it to do whatever it takes to further confirm these discoveries.

I also spoke in Hyderabad with an independent archaeologist not connected with the Indian government, but who has a deep interest in these discoveries and he says they are still going to have to send divers down there. Up to this point, they have not sent divers down. The information they have is based on the sonar readings and the dredging they have done. Eventually, they are going to have to find a way to get people down there to take a closer look at this. I think this effort is going to go on.

Now, another American archaeologist, Richard Meadows of Harvard University, is proposing there should be an international effort here. On the surface that sounds like a good idea, but it also may be an effort of American archaeologists and others to control the project. I don't think they want to see a civilization being as old as it appears to be according to these new finds at 9500 years ago. So, I would hope the Indian archaeologists and government would be very cautious about letting outsiders in there who might have a different agenda and who might try to control what gets let out about this very important discovery. It could be quite revolutionary.

Now, if it further happens that additional research is able to identify the culture of the people who lived in that city that's now underwater. If it turns out they are a Vedic people - which I think is quite probable given the location of this off the coast of India - I think that would radically change the whole picture of Indian history which has basically been written by western archaeologists.

India's Vedic Culture - Was It Really Older Than 3500 Years?

The most archaic Sanskrit (Devanagari) is that of the Vedas, multiple books written in thousandsof hymns and verses arranged in song cycles. The Vedas say that "God-men" brought Sanskrit to Earth men as a language of musical tones. Above on the left is a comparison of the numerals 1 through 10 in Devanagari Sanskrit compared to Arabic. On the right are some examples of Devanagari vowels and diphthongs. Sources: The New Encyclopaedia Britannica, 15th Edition © 1993 and Sanskrit Keys to the Wisdom Religion © 1968 by Judith Tyberg.

Ever since the 19th Century, there has been a huge debate about the actual history of India. When the Europeans first came there, they noticed that the people in India who had the Sanskrit language as the main language of their literature - they noticed that the European languages were similar (in word concepts), so that meant the Europeans and East Indians had to be related. The 19th Century scientists also noticed that the Sanskrit culture or Vedic culture, as it is sometimes called after the ancient Indian literature, Vedas, which means knowledge. So sometimes the ancient Indian culture is called the Vedic culture or Vedic civilization. The literature is called the Vedic literature. So, the scientists noticed that it appeared to be older than the European cultures. Since the European languages were related to the Indian language Sanskrit of the Vedas that could only mean that the European peoples had to have come out of India somehow and then gone to Europe with their languages that differentiated into Russian, English, Spanish, German and the rest of them. The European investigators didn't like that idea because it would have given the Vedic culture a position superior to their own. So, these early cities in the Indus Valley like Harappa and Mohenjo-Daro have been identified by archaeologists such as Richard Meadows and others as being non-Vedic. They think the Vedic culture came into India maybe 3500 years ago.

Isn't that inconsistent with the concept of the Vedas of the Krishna character who comes and says the universe is teeming with life and appears to have knowledge about other habitations in the cosmos and is talking from an age that would go back at least 9,500 years?

Oh, absolutely, Linda. In these ancient Sanskrit writings, there is no hint at all that the culture came from anywhere else.

And if they are the prime source and if the Vedic literature can be taken literally, then it implies that there were cities there inhabited at least several thousand years ago.

Yes, and there has been other research going on in that area. For example, the Rg Veda, which is one of the earliest Vedic literatures, talks about a mighty river called the Saraswati that flowed from the Himalayan mountains down to the Arabian Sea, down in that area of northwestern India. And such a river doesn't exist there today. So, what happened is that people thought therefore the Rg Veda cannot be talking about India. It has to be talking about some other place outside of India where there was some kind of river.

But what happened that is quite interesting a few years ago is that archaeologists in India started studying the satellite photographs from American satellites like LANDSAT had been providing and they noticed there was a dry river channel that began up in the Himalayas, a huge river that went down almost to that Bay of Khambaht (Cambay) we are talking about (the location of the underwater city site). And then later, they found that on the banks of that river there were 800 to 1000 urban sites, archaeological sites.

Is there a possibility that there could have been some sort of non-human co-habitation on the continent of India let's say 50,000 years ago that could explain all of the Vedas?

Yes. In Kashmir, the valley of Kashmir, it appears it was many years ago a lake. Now, there is an ancient Sanskrit manuscript that tells of a lake that existed in that area, so that account is there in some ancient writings. Now, according to modern geological reporting, about 40,000 years ago Kashmir was indeed a lake in the valley of Kashmir in northern India. It was covered by a huge lake and it was blocked on the southern end by a little range of mountains. And at a certain point, something happened and it broke open and the lake drained out. That happened about 40,000 to 50,000 years ago. So, it is interesting that you've got this ancient historical record that talks about this lake. And if it is to be taken literally, then it means that somebody must have seen this lake as it existed 50,000 years ago and wrote about it." 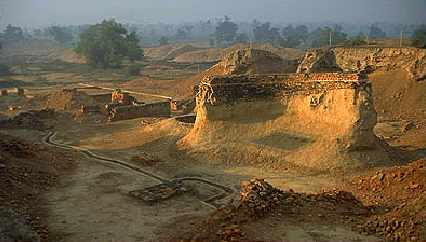 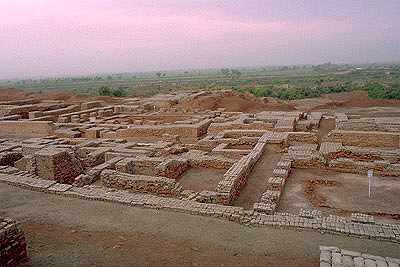 Excavated walls of a Harappan urban city, one of the most mysterious cultures of the ancient Indian world more than 3,000 years ago. The people were literate and used the Dravidian Sanskrit language, only part of which has been deciphered today. The artifacts from Harappa and Mohenjo-Daro in the Indus Valley of Pakistan are extraordinary in beauty and detail.Source: North Park University, Chicago, Illinois.

Some Details from Harappan Urban Sites: 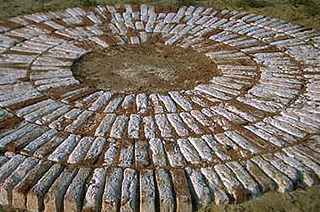 Mysterious white rings made of brick dot the landscape where Harappan people lived, but archaeologists do not know the function. One guess is platforms for spreading and drying of grains. Source: North Park University, Chicago, Illinois. 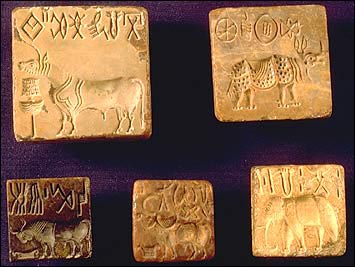 The first objects unearthed from Harappa and Mohenjo-Daro were small stone seals inscribed with elegant depictions of animals, including a unicorn-like figurein upper left, and marked with Indus script writing which still baffles scholars. These seals are dated back to 2500 B. C. Source: North Park University, Chicago, Illinois. 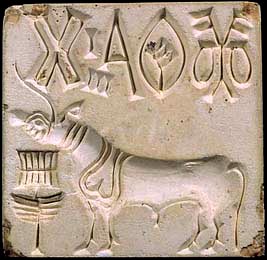 This seal is a close-up of the unicorn-like animal found in Mohenjo-daro, measures 29mm (1.14 inches) on each side and is made of heated Steatite. "Steatite is an easily carved soft stone that becomes hard after firing. On the top are four pictographs of an as yet undeciphered Indus script, one of the first writing systems in history." Image sourceDept. of Archaeology and Museums, Govt. of Pakistan..