Details, details within details. Colors, lines, forms, materials, Everything in details. And whole too...

The good and the bad, the beautiful and the ugly, it is difficult to see where anything begins and ends.

All this is literature!

In short, there is something in Nurçin's paintings that I cannot define..." 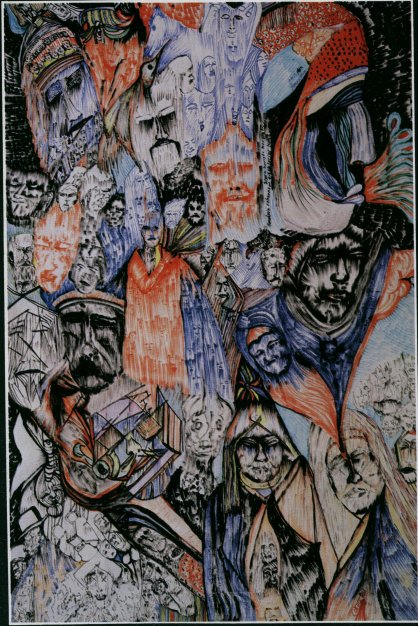 "I LIVED AT THE CLIMATE OF FRANCE AT THE REVOLUTION."

Bubi: Nurçin, as far I know you have had no previous education in art or painting. Neither have you been to any workshop with any artist. How then did you start painting?

Ramazanoglu: Ever since my childhood, I have been very lonely. Loneliness scared me a lot. Especially having to stay on my own at night was a real nightmare. The nights that I had to be alone at home were spent sleepless. I used to read, write and think a lot until the early hours of the morning. Then one night faces began to appear on the bed sheets.

Bubi: How did these faces affect you? 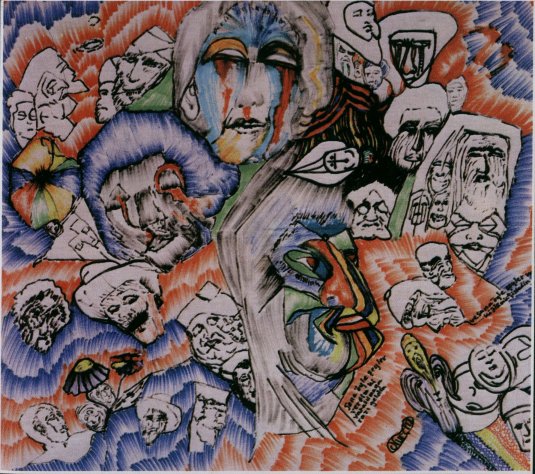 Bubi: What exactly did you see?

Bubi: Did you only see faces?

Ramazanoglu:  Yes at first I saw only faces. Later I started seeing bodies too and on rare occasions animals and flowers, and finally a tree, and I drew the tree. 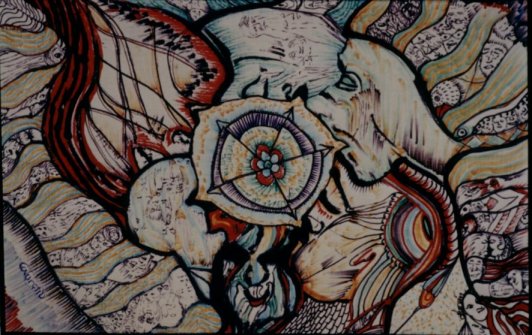 Bubi: In your opinion did these apparitions exist or were they imaginary?

Ramazanoglu: They did exist. After the figures writing started coming.

Bubi: What sort of writing? And why do you say they started coming? Where they coming from a certain place?

Ramazanoglu: I suppose so, because they were not within my conscious mind. For example beside a certain face that I drew such a phrase appeared: "I lived in the climate of France in the Revolution. The word climate was used out of context from my everyday language. Then people I knew started recognizing the faces I drew. 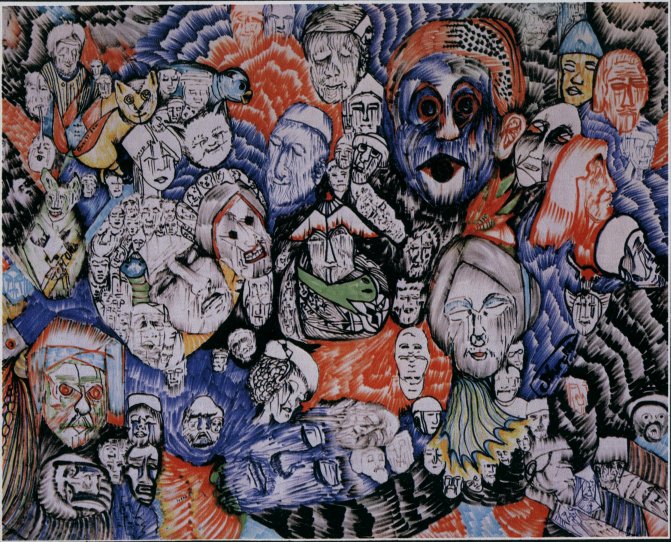 Bubi: Could you give an example?

Ramazanoglu:  Oh yes! There are so many! I shall tell you one of the recent ones. Mr. Safa Giray's wife recognized one of the face 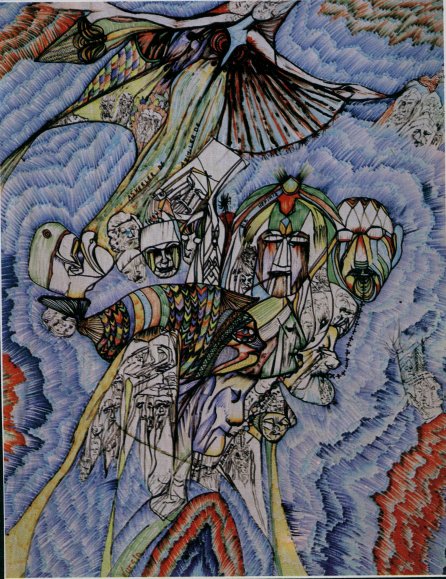 s as that of Siyun Bike, who was the last khan of Kazan. And she told me about him. Then other people who saw my drawings recognized may faces as belonging to people I did not know, but they did tell me about them. Once I had sketched a monk and with him a figure like the head of an antelope. A German friend who saw this said that it was the patron saint of animals.

Bubi: Alright Nurçin, what would you say to someone who might say you already knew these people?

Ramazanoglu: I would only laugh.

Bubi: Then how can you explain this phenomena you are going through?

Ramazanoglu: I link it to physical events. Maybe some part of my brain entered a different period of life.  Today we can watch on TV events taking place in another part of the world and even the universe, as a result of certain physical and chemical phenomena. This is quite real. Maybe some day we shall be able to see these with a piece of lens, or with a section of our eye that we do not yet discovered the use of, or by some totally different means. I am sure of this. This is something that I cannot know or explain, I started seeing life in another period of time. 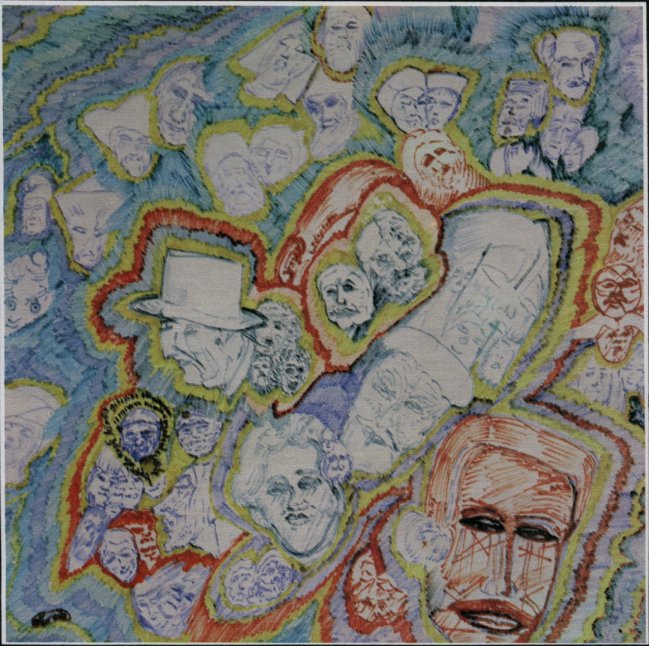 Bubi: Have you ever thought that these apparitions could be the result of something else?

Ramazanoglu: I was scared when I started seeing these faces and began to note down the writings. I started wondering if this was due to a state of mental imbalance, schizophrenia or paranoia, and I stopped sketching. Well, actually I stopped writing the phrases rather than the sketching. First the pictures had appeared, then the writing. Could it be that next time I would start talking with them? So I went to a number of psychologists and Psychiatrists.

Bubi: Would you mind telling us about their opinion of the issue?

Ramazanoglu: I took my sketches with me to the first psychiatrist I went to see and asked him whether these were the symptoms of some sort of sickness. he told me that these were things that anyone could draw, and even that you can find such in comic books. Another one said that he was not interested in such cases. Then I went to see a psychiatrist to whom I was related concealing the fact that I was the person who had the problem. Pretending it was all happening to a friend. He said this was called photo something and talked about it as if it was some sort of sickness. With the fear that this would be diagnosed on my recent experiences, I declined from going to him with my sketches, and from revealing that I was the person in question. Another psychologist I went to see after this said I was sketching male figures all th time and was expressing the feelings of a lonely woman in this way. 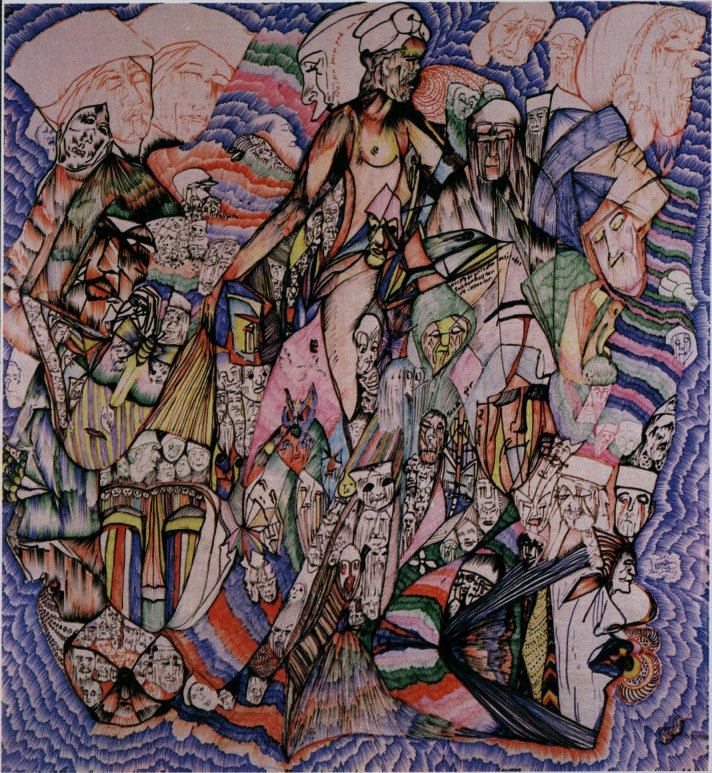 Bubi:  Alright Nurçin, would you yorself say that you were a balanced person?

Ramazanoglu: What do you mean when you say this? Do you refer to success, avoiding life or loving. I have managed to live up to now. At least I have not committed suicide. I am sure unbalanced people can go on with their lives too. So since I have managed to survive despite all sorts of difficulties. I must be balanced at times and not so at others.

Bubi:  How did your family circle and friends react to your sketches?

Ramazanoglu: They did not want me to continue, and were disturbed about them.

Bubi: What sort of disturbance did they try to stop you?

Ramazanoglu: They thought that by doing these sketches I would become ill. They said unpleasant comments would be made by others. My son especially wanted me to stop. He was worried about me. My friends were both impressed with my drawings and disturb 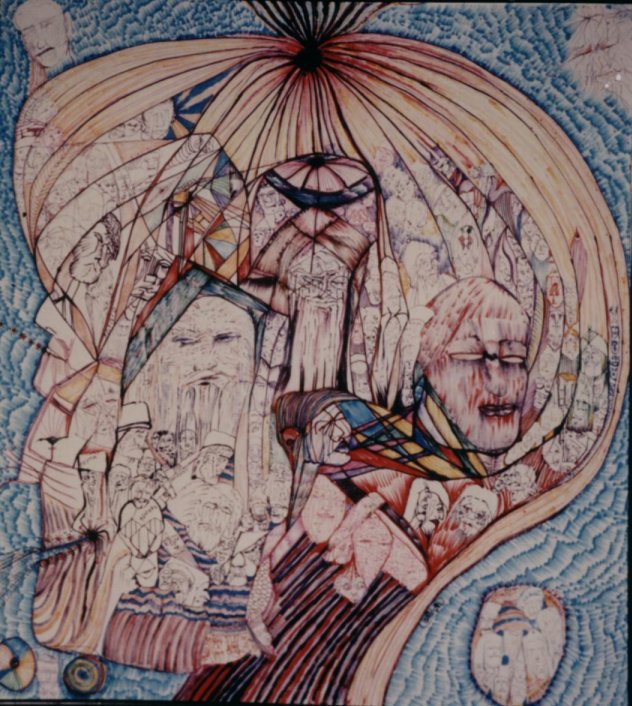 ed. Since I was scared to be on my own at night. I used to take my work with me whenever I  went to stay overnight with friends. But they started saying my sketches disturbed them, since they were all figures of executioners, monks, soldiers, sailors who had been drowned, and faces within faces. They asked me not to bring all these to their homes. But still they could not wiat to see every single thing I sketched.

Bubi:  Does your own work ever disturb or worry you?

Ramazanoglu: Certainly not!  I relate with them I enter them. They do not bother me at all. Besides I see them everywhere.

Bubi:  Have you ever dreamt of thought of becoming an executioner?

Ramazanoglu: Imagine an executioner. If you asked a hundred people if they wanted to become an executioner, I doubt if one would say "yes".  The executioner has to fulfill a duty that no else wants to do, or want to be identified with.  I must have been in debt to  the executioner and that is probably why I sketched him. Maybe he was doing the work that had been asked of me.  If human lives and roles in life had been compared to the cast in a play, then I would say that the executioner had the worst role. 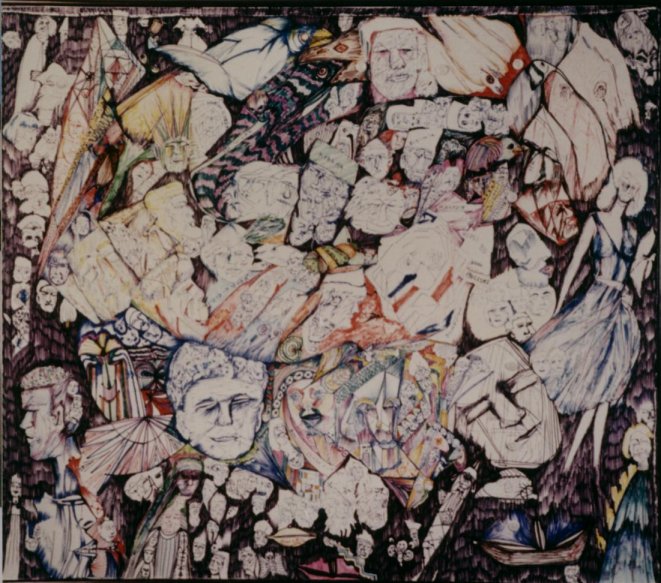